Generally, death comes to us first through the elderly. A grandparent, a distant relative, an older neighbor passes on and we learn what it truly is to lose someone. We learn what it means for someone we knew to never come back.

That’s not how it worked for me. Perhaps because I was raised on a social island by introverted parents. Perhaps because my own grandparents, who lived so far away, were so long-lived. But death came for me first just after college. I was not quite 22, living in Los Angeles, and visiting my father in Riverside for the weekend when my boyfriend called to let me know that Joe had died.

Joe. Joe who would be turning 23 in less than a week. The Joe I had known since I was so small our gatherings involved button-mashing Mortal Kombat tournaments and crackers slathered in butter and grape jelly for snack. The Joe that years later taught me how to make a proper margarita (always way more tequila than you’d think) and who I had always looked up to because he was a year older than me at a time that that one year seemed like an eternity. And because he had always radiated a kindness that so many don’t.

I remember most the feeling that there had been some sort of mistake. That of course Joe hadn’t died, because I’d written on his Facebook wall that morning. Even while seated at his memorial, watching pictures of him scroll by while music played. It all seemed a kind of terrible, strange dream.

This year marks ten years since Joe died. It still feels like a kind of dream. In fact, he does visit on occasion while I sleep. Even after all this time. Always the same 22-year-old boy with blue eyes and dark, curly hair. My first question is always why we were all told he died. As though he was so special he was spirited away to some top secret project, or whisked away into witness protection until it was safe to return to us.

This year, on the anniversary of his passing, while all of us who knew him take a moment to remember the goodness of his life, I notice that I have stopped looking up to him. That so much time has passed that he now seems a boy to be cherished, rather than the elder to be looked up to.

I notice, too, that the memories have become hazier. Distorted. Like a record that has been played too many times.

I realize that I am forgetting. That a remembered moment or a story shared brings first a smile and then the pang of loss, while for so long it has been the other way around. I realize that all of us who knew him have become such different people. That we walk such a different earth. And that even in my mind, my heart, he is becoming different. A photocopied version of himself.

You would have been a good man, Joe. So much better than most of us. Like the proverbial elephant, I will never forget that. I will always believe the world would be better with you in it. I will always mourn this truth. Bye again, Joe. For the rest of my years, I will always be saying goodbye. 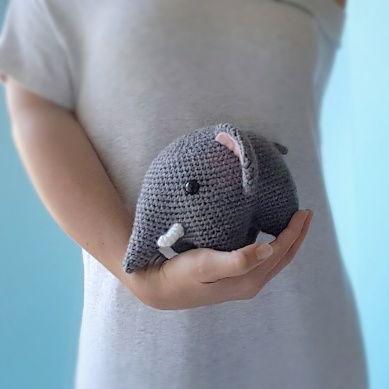 Want to see more of my work? Find me on Instagram: @acassafrass or on Etsy: etsy.com/shop/lascosaschiquitas

2 Replies to “Amigurumi Elephant – On Forgetting”